By definition from the American College of Veterinary Surgeons .Gastric Dilatation-Volvulus (GDV) is a rapidly progressive life-threatening condition of dogs. The condition is commonly associated with large meals and causes the stomach to dilate, because of food and gas, and may get to a point where neither may be expelled. As the stomach begins to dilate and expand, the pressure in the stomach begins to increase. The increased pressure and size of the stomach may have several severe consequences, including:

The stomach can become dilated enough to rotate in the abdomen, a condition called volvulus. The rotation can lead to blockage in the blood supply to the spleen and the stomach. Most pets are in shock due to the effects on their entire body. The treatment of this condition involves stabilization of your pet, decompression of the stomach, and surgery to return the stomach to the normal position permanently (gastropexy).

This is a fast-moving, immediately life threatening emergency.  It has been called “the mother of all emergencies”.

This is just one GDV story, but unlike most, this has one very unusual twist… the victim is a 9 week old puppy, and the puppy survived!

Katie Bell ate her dinner. Went outside and was found eating food left by one of our older dogs who, unknown to us, had not finished her food. She then tried to drink a lot of water.  We stopped her, because she looked extremely full.  We put her up to rest with her sister, and within 30 minutes, heard a sound that can only be described as a very loud exaggerated belch.  It was a sound that made four adults jump.  I went to check on the puppies.  Katie Bell was trying to vomit, trying to get comfortable and crying. She could not vomit. She was in notable distress, and her greatly expanding abdomen was alarming.  We were visiting our daughter, so she called her Vet for an emergency-vet referral and I videotaped Katie Bell, so that the Vet could see the onset symptoms.  We initially thought it might be just “food bloat”, but I strongly sensed she was in a life-threatening situation, and after several attempts we tried to contact any close Emergency Vet (E-Vet).   One was closed because of snow (the vet could not get in).  The second was a known to give sub-par care.  The last was called “Pets R Us“, which terrified me (they REALLY need to consider a name change), but was about 5 minutes away, and this girl needed immediate attention. We left, praying Katie Bell would survive.

This is the video I took as she called her Vet:

We arrived at the clinic in less than five minutes of leaving the house, and were brought straight back.  He took x-rays and sent them to the radiologist for an “official” reading, and at the same time, prepped Katie Bell for surgery.  I credit Dr. Habeeb for his quick decisions.  He had to wait for the Radiologist report because of clinic policy, but he wasn’t fooling around while he waited. He started a IV catheter and begin shock management which included rapid administration of intravenous fluids, and pain medications. Blood work was done to assess internal status, placed on a cardiac monitor, and antibiotics given.   She was completely prepped and hydrated by the time the result came back.

Note how her stomach is not in the proper position and is very bloated: 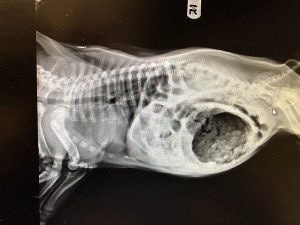 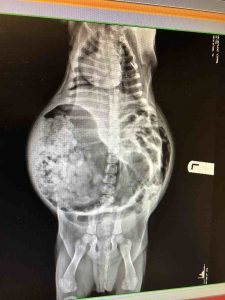 This is the radiologist’s review: 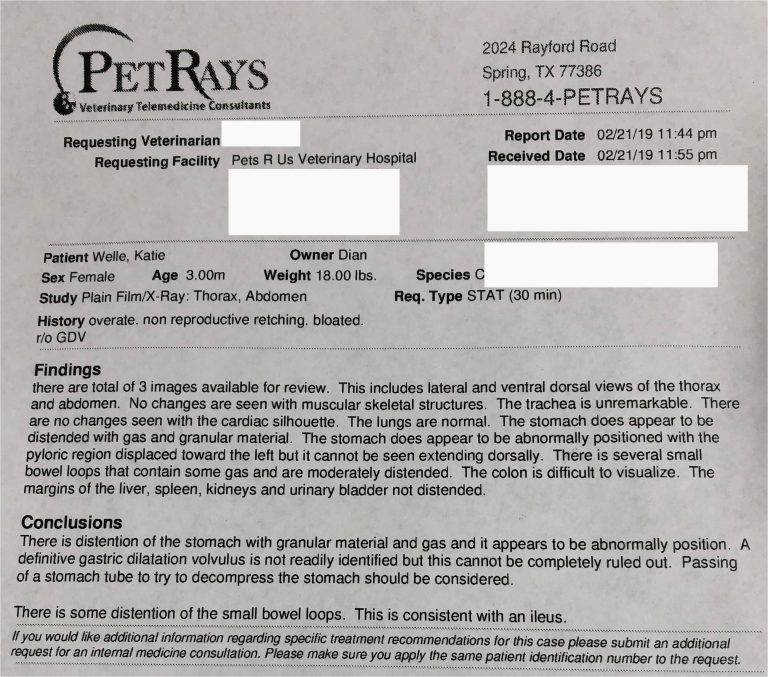 The Dr. told us to go home, and that he would call us the moment he finished the surgery.  Reluctantly, we left our precious baby in his care, and prayed.  We knew all the risks of this condition, and being a retired ER Nurse, I knew too much, which led me to believe I would never see Katie Bell alive again.

When the stomach twists, it immediately cuts off all circulation to the stomach and the bowels.  The spleen is often involved in the torsion as well.  Hemorrhage is a real risk when the spleen is damaged, and because the torsion has effects on the whole body, including the heart, the surgery and post-op period are gravely complicated.  The risk of death is absolute in an adult dog (about 50% depending on the amount of time from torsion to surgery), and we were dealing with a baby.  No veterinarian I have spoken to since, has ever seen GDV in a puppy, although literature states it can happen, and none would expect a puppy to survive.

Katie Bell was in the skilled hands of Dr. Habeeb, and absolutely was in the hands of God. 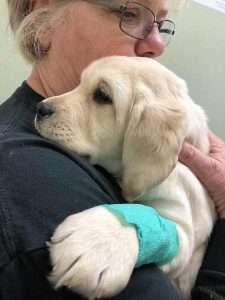 The Dr. rotated her stomach back into position (yes, it was in full torsion), and her spleen and stomach were checked for damage. Her stomach was intact (no rupture), and as it re-profused, it looked like the tissue was going to be okay.  Her spleen had a small amount of discoloration at the tip, but showed signs of re-profusion immediately.  A tube was passed down the esophagus and into her stomach, to decompress the stomach, which was full of gas, fluid, and food.  He did not surgically enter the stomach.  A gastropexy was performed whereby the stomach is tacked to the body wall behind the rib cage down low, so that it could not twist again out of position, however, due to the delicate nature of her tissues, he was not confident that the gastropexy would hold.  She did suffer some cardiac dysrhythmia related to decreased coronary perfusion and re-perfusion injury during the surgery.

A few hours later we got the call that she wasn’t just doing well, she was wagging her tail.  He stated she was fully awake within 15 minutes of the surgery.  Sedated, she would now sleep, and so could we.  The next few days could bring heartache, as complications often happen within days of this surgery.  Sometimes, the necrosis (death of tissue) is not fully realized when the surgery is complete, and death of stomach, bowel, heart, lung and spleen tissues could advance well after the surgery is complete.

Three days later, Katie Bell was released from the hospital.  A good Veterinarian friend suggested human baby onesies, rather than make this baby wear a cone, as long as she did not fuss with the outfit.  This was a precious tip!  Not only was it effective, it was clean, and we bought several, so that they could be changed frequently, and darn it… they were darling.

We stayed with our daughter (in California) for a few more days, to be sure she would not suffer any complications, and because Katie Bell was on so many medications (about six), we wanted to make sure our trip home to Idaho was as risk-free as possible. I am very fortunate to have a number of friends who are Veterinarians, and breeder friends who have trusted vets, that we had the names of several who would see her at a moment’s notice, night or day, on our two day trip home. At least we thought it would be a two day trip home. We were wrong. A snow storm hit us when we reached Klamath Falls Oregon, and by the time we got to Bend Oregon, we knew we had to stay put. None of the Veterinarians we had lined up were in Bend. We took her to Central Oregon Animal Hospital and had her rechecked for safety by Dr. Douglas, wanting him to see her stable in the event she suffered any change in condition. What a kind and thoughtful Dr.!! She was in great condition (for a puppy who should have died), and we were much more comfortable knowing she had been rechecked. This was the second Veterinarian we had seen with her that was not familiar to us, which is scary when you have come to trust your pet to the care of well-vetted doctors.

We were snowed in for three days. We had her rechecked by her own vet the day after we got home. Needless to say, like the others, he just shook his head that this puppy was alive, and acting perfectly normal.

Katie is a *very* rapid eater, and immediately after surgery we realized the need for special bowls to slow her down.

It had been our intention to keep Katie Bell for showing purposes, but we decided that she’d had enough in her short life. She needed a family of her own, to just be a pet. However, the risk of GDV recurrence is great without a gastropexy, and we weren’t sure if hers would hold. Then our daughter and her family came forward, asking for her. Our daughter is a P.A. in the Army, and fully understood the dangers, risks, and necessary precautions that need to be done, up to and including checking and possibly re-doing the gastropexy at a later date. Dogs who have had GDV and do not have a functioning gastropexy have a 85% chance of re-torsion at a later date. A functioning gastropexy reduces the risk to 4%.

Katie Bell has since had two occurrences that indicate that her gastropexy may have held afterall. She became mildly distressed and bloated, then belched and was fine in a very short period of time. We believe she suffered from mild gastric dilation, and belched up the gas.  Today, Katie Bell is growing up and is a very well-behaved puppy.  She is quite the little rock-star, gaining attention everywhere she goes.  She’s a little walking miracle.  We owe such a debt of gratitude to Dr. Habeeb and his staff, to Dr. Douglas, and of course our own Dr. Mihlfried, but mostly, we are grateful to God for this precious little life.

This is Katie Bell during her recovery, and meeting her new family – our daughter, her husband, and our grandchildren – (click on thumbnails for larger images:):

One year later, Katie Bell is living a normal life with her family.  We did have some dicey moments when she was spayed.  There was no way to know that her abdomen had developed a massive amount of adhesions (bands of scar-like tissue). Normally, internal tissues and organs have slippery surfaces so they can shift easily as the body moves. Adhesions cause tissues and organs to stick together. They can connect the loops of the intestines to each other, to nearby organs, or to the wall of the abdomen. They can pull sections of the intestines out of place. This may block food from passing through the intestine.  Katie’s adhesions have done most of the above.  Her bowel was firmly adhered to her abdominal wall, her organs and intestines are glued together.  Her family is aware this could cause loops of intestine to twist in the future.  When the veterinarian made his first incision, the adhesions gluing the intestine to the abdominal wall put the intestine right under his scalpel.  A small amount of bowel was nicked.  This resulted in her losing four inches of bowel.  It turned a “normal” spay (there will never be a normal surgery where Katie Bell is involved) into a three day stay in the hospital.

In usual Katie Bell style, she bounded out of the hospital as if nothing had happened.

This is Katie Bell today, on her “I’m alive” re-birthday: 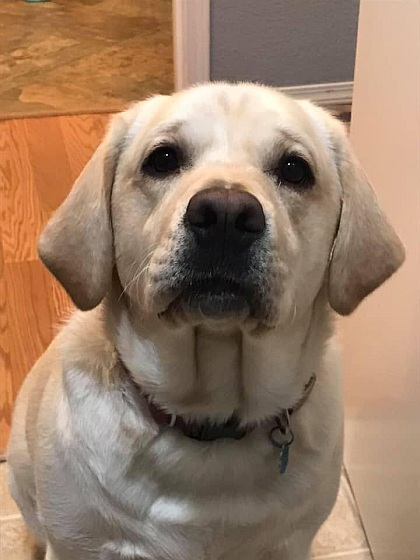 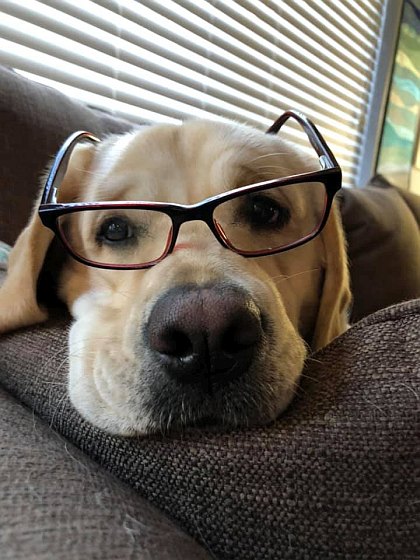 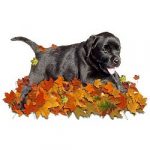