A Facebook friend recounted a harrowing adventure in whelping a litter, and it caused me to recount one of mine.

My most/least (you pick) favorite whelping memory started fine. She went in to labor, and delivered one puppy without ceremony, …and then nothing! Secondary inertia seemed likely, as she did nothing for hours. Absolutely nothing. Dan and I drove off our hill in the middle of the night, headed for the E-Vet, with me in the back with my bitch, sure we were headed for a c-section. Half way to the vet, she decided the time was right to start pushing. We pulled the car over, and a nice healthy puppy was born. We turned the car around, and started for home. She started pushing again. As she did, a car zipped past us in the fast lane, zig-zagged into the slow lane ahead of us, lost control and rolled over the embankment. The resulting dust looked like an explosion!

As all of that was was happening, I failed to see it, because I was assisting the puppy from the birth canal.. but of course, I felt the braking, heard the gasps and swearing from Dan. I had that puppy with its placenta still in hand, and I looked up and saw the billow of dirt to our right, as Dan pulled our car over. I now had two wet puppies, one still in my hand, one in my lap in a towel, and one older sibling in the warming box, and my bitch starts pushing yet again. Now, I was an ER Nurse, and should have immediately leaped from the car to rescue the driver, but that accident looked like it had to be a fatal crash, and I had lives counting on me where I was. I yelled at Dan to go see just how wounded the driver was, because if he/she was already dead, I wasn’t leaving my dog! He could do CPR as well as me if necessary. If anyone was alive, I would assist.

Just as I said that (as I was trying to cut the cord on that puppy before the next appeared), a woman runs up the embankment and runs almost into our car. Dan and I both yelled “how many in the car, and do you need an ambulance?” She screamed “just me, don’t call the police” and starts running down the freeway in the center of the slow lane on foot, drunk as can be. We called 911, and a CHP Officer nearly materialized before our eyes. I yelled for Dan to call my neighbor to come get me and leave her car for Dan because he had to give a witness account. I told him “You witnessed this, I didn’t!!! I need to get out of here!” Dan called Leslee. I helped deliver puppy number 4. Momma relaxed. More were coming, but she clearly needed a break from her jet propelled prior three.

Think this story is crazy enough? As Dan is talking to the CHP, who had run after the woman and returned with her, my neighbor’s truck almost screamed past us. She pulled over in a cloud of dust just a ways ahead of us. I swear she opened her door and piled out before the dust settled, and ran toward us in her nightgown, robe, and slippers. She runs almost headlong into the Deputy screaming “WE’RE HAVING PUPPIES!!!” She tossed her keys at Dan, and without so much as an adios, jumps in my car, and drives us home, leaving Dan, her truck, the very confused looking officer and the drunk behind.

We lost Leslee some years later to cancer. Gosh I miss her, but remembering this story gave me a great laugh and a wonderful memory of her. 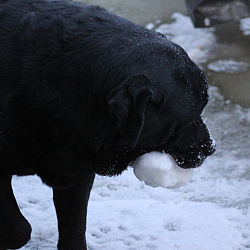