Exactly what is “pick of the litter”? Most people imply that it is “the best puppy”. Best for whom? Best for what? There are dogs better suited for particular things but that would depend on who the dog is going to as to which pup is the “pick of the litter”. If you are getting a puppy from me, I can promise you that *I* (the breeder) am keeping what I believe to be “pick of the litter”. That puppy is not for sale. Of course, I sometimes discover, as the puppy grows, that I picked wrong. My guess is, some of my *real* picks of the litter went to their new pet home at eight weeks of age, are neutered, and loved by their family.I have had people ask me to teach them how to pick the best pup out of a litter. The truth is, when I figure it out with certainty, I’ll start teaching others how to do it. For now, I’m pretty good at picking the right puppy, but it isn’t down to a science yet. In fact, I’ll be so bold as to say NO breeder has it down to an absolute science. Some puppies are the perfect example of the ugly duckling who grows into a beautiful swan.

Some people think that they need to see the entire litter of pups in order to pick out a good dog. We have found this is a misconception. In any one litter, the majority of the puppies are comparable. In each litter there is usually a highly energetic dog, a more reserved dog, and the rest fall in between. The term pick of the litter is simply a matter of opinion.

Most people find themselves on a list in some picking order. On my lists, I reserve first pick of each color and each sex. I select out those puppies of each color and sex, that I feel are the best examples of the breed physically. I set those puppies aside for myself. I probably won’t keep them all, but they’re held aside for later evaluation and observation. So, when you call me well after my puppies have gone home, and I have only one older puppy available, you can pretty well bet that this puppy was one of my choices, that I have later decided to sell. They’re hardly “last pick”.The term runt refers to a sickly and abnormally undersized puppy. Few litters have a true “runt”. Within two years the littermates (given proper care) are within pounds of each other. Based on logic alone, there is always going to be the largest pup in a litter and the smallest, yet this too changes as the puppies grow into adults. The smallest or largest of a litter does not always remain so for the rest of its life.

A good example is our own Blue Knight L’ll Bit Country, “Lil”. Lil was just six ounces at birth. We had to bottle feed her because she was so weak. When the time came for the puppies to go home, she was about 1/2 the size of her littermates, and we could not convince people that Lil was a nice puppy. I had no intention of keeping her, but I decided to sell my pick, and keep her myself. There was just something about her. This is just one example of a tiny “last pick” puppy that nobody wanted.  Even I underestimated her!   A year later, boy was I glad nobody wanted her: 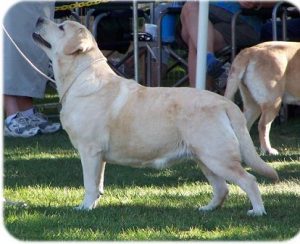 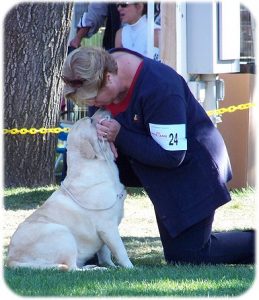 So, how *should* you pick your pet puppy? Well, first, if you don’t trust your breeder, DO NOT buy your puppy from that breeder. Everything in this article is contingent on you trusting your breeder.

Do you have “last pick”? RELAX. If you like mom, you’ll probably like her puppies. If you have had the luxury of meeting the father, and you like him too, so much the better — after all, these puppies will be similar to their parents. If you trust your breeder, and they’re reputable, they’ll tell you everything you need to know about that puppy. It is unlikely that the last pick puppy has any problems. If a puppy does have a small issue (overbite, undescended testicle, hernia, etc.) the breeder will tell you and explain it to you. I don’t know a reputable breeder that would not give you back your deposit if the last pick puppy has some minor problem and you decide against it. If a puppy has a major problem, it shouldn’t be for sale anyhow.

If you are the owner of the “last pick” puppy in a healthy litter, here is the scientific process by which those before you have selected their puppy (from years of observing, with wonder, this strange process):

• It was the biggest
•It was the lightest
•It was the smallest
•It was the darkest
•It had dark toenails (I swear!)
•It had light toenails (I swear!)
•It had the “sweetest face”
•It had a bigger head
•It was the most active
•It was the least active
•It had the biggest feet
•It had the shortest coat
•It had the longest coat
•The roof of its mouth is darkest (Yes, I swear this is how one was picked)
•Its ears were longer/shorter
•It “came to its name”
•It retrieved a feather
•It didn’t chew their shoes
•It DID chew their shoes
•The one without white, because white “makes them hyperactive and stubborn” (say WHAT?)
•The one with white, because it made the dog unique.
•Or, my favorite, and most common method … they asked me “which puppy would you pick”? (If I am keeping one, THAT is the one I would pick <grin>) As for the puppies from that litter that I didn’t pick for myself…. well, I never pick a puppy for others — I will, however, tell you everything you want to know about each puppy.

Your last pick puppy simply did not fit into any one of the above physical/behavior expectations of those who came before you. I have never sold a pet puppy to anyone who had any concept of proper conformation, or had a true working knowledge of what constitutes “first pick”.

If you have a pick, great. Pick the puppy that your heart tells you is “the one”. If you don’t have a pick, consider yourself lucky, because you didn’t have to go through the tough process of trying to pick one over the other, fearing you’ll make some sort of mistake.

The majority of people who have to pick one over another tell me it is a terrible process.  I agree.
Dian Welle
Blue Knight Labradors 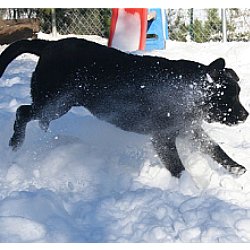