“Rare” Wooly Labrador Retrievers.  There is no such thing as a “Woolly” Labrador. This would be a made-up name by some who would lead you to believe this is a somehow ‘rare’ event, and something to be desired. There are Labradors that express the “Long Coat Gene”. In other breeds, this expression is called a “Fluffy Coat”. The long coat gene is a simple recessive trait. Two copies of the genes are required to express the long coat (one from each parent). Any breeder who produces this trait and is responsibly breeding to the Standard, would not deliberately breed for it again. There is nothing wrong with the puppies, but they are not correct to the Standard. They would be sold as pets, just as a puppy with a mismark would. Breeders who do not care about the Standard often willy-nilly breed their dogs and sell puppies that are out of standard as something ‘unique’, ‘different’ or ‘rare’. Do not be fooled. This is no different than a breeder who produces a mismark. There is nothing rare about it. No reputable breeder would ever advertise the possible future birth of puppies who carry the long-coat gene, because no breeder would anticipate having it. Should they produce it, they’d DNA test their dogs so as not to produce it in the future.

I have never personally even seen a long-coated Labrador, and I have bred Labradors for over 30 years, visited many kennels, and shown dogs for as long. It’s simply not seen very often because it accidently shows up in a breeding, when the breeder did not know their dog may carry the gene. They don’t deliberately breed for it again, so these dogs are seldom seen, but they do happen.

LEGAL STUFF
Website Built by Blue Knight. All graphics , photographs, and original articles are the property of Blue Knight. Permission must be obtained for use on other sites or for other purposes. 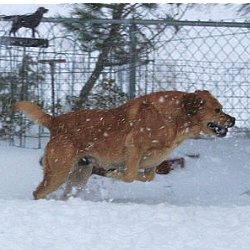