Typically, failure to thrive, or “fading puppies” appear vigorous and healthy at birth and suckle with no difficulty. Within a day or two, become progressively weaker, make less vigorous attempts at nursing, lose weight rapidly, and die. Fading puppies should not be confused with a litter suffering from Canine Herpes Virus.

There are often positions or movements (or lack of movements) that these puppies display. A normal puppy twitches and moves frequently. The first signs of a fading puppy are often that they lie still, with less of the jerking and moving that their littermates do. They often lie on their stomachs, with their heads stretched out. Even though pneumonia is often difficult to diagnose in a puppy this young, if a puppy is positioning itself in a sniffing position, it should be suspected, and often the vet will treat for pneumonia at this time, even if a positive diagnosis can’t be made. Cardiac problems with resulting hypoxia can also be a cause of this. Their heads may sway from side to side, and where they vigorously nursed on the first day, each day they seem to have less and less energy as the days go by, and despite adequate milk, do not thrive and grow poorly. They frequently begin to look unthrifty. Their body tone lacks the firmness of their littermates, their coats are coarse, and often a breeder reflects that that they “just didn’t look right”. They often have what I refer to as a “mewing” cry before death. It is absolutely a cry of distress, and causes both breeder and the bitch to experience a great deal of distress as well. It has a high tone, anxious quality to it. This cry is very difficult to listen to for both breeder and the bitch. In the end, fading puppies lack the body fat that their littermates are rapidly developing, despite extra bottle feeding, which often by this time, the breeder has begun. They often suffer from a variety of digestive upsets and respiratory problems. They usually die within 5 – 10 days.

The term, “fading puppy syndrome”, describes symptoms, rather than an actual disease. Fading puppy syndrome is thought to be caused by bacterial or viral infection, inborn metabolic problems, or physical causes (such as renal or cardiac anomalies).

Before you consider that a puppy is suffering from fading puppy syndrome, be aware of a few specific issues. Look first to hypothermia being the cause of any puppy having trouble. Hypothermia is the number one cause of death in the neonatal puppy. Second, be sure the puppy is not dehydrated. Puppies have no physical reserves, and dehydrate quickly. Treat for hypoglycemia *only after warming the puppy to normal body temperature*. Giving glucose will show positive results in moments if hypoglycemia is the issue.

Bacterial Infection can start in the navel stump. Although, it can be transmitted in the uterus prior to birth or in the vaginal canal during birth, and contaminates the pups causing general sepsis. In severe cases, puppies that are born small and weak may already be infected by the germs that build up in the womb, because of a low-grade infection in the uterine horn(s), and infection quickly spreads. Veterinary treatment is a must. A full course of antibiotics may treat an infection, or delay the onset of secondary bacterial infection, however, one should never give antibiotics blindly.  Overuse of antibiotics “just in case”has led to methicillin resistant bacteria directly caused by the overuse of antibiotics in todays society.

Viral infection tends to occur later than the first week of life.

Physical anomalies are often the cause of fading puppy syndrome, and are often not discovered unless a necropsy is done.

A newer therapy, is to give oral blood serum to puppies for the first 72 hours of life, or a IV injection of blood serum from a healthy dog. Collection of the blood and preparation of the serum should be left to your vet.

Extra warmth, bottle feeding, and antibiotics (if the vet prescribed them) will help to increase the chance of recovery. It is essential that a fading puppy be kept warm and receive extra calories if there is to be a chance of recovery. But be aware, that with even the most vigorous treatment, often puppies just don’t make it. One of the hardest things for a breeder to do, is to simply understand that nature must take its course, and sometimes, fighting too hard to save a puppy can bring heartache later, when physical anomalies are discovered, and there is little to no hope of saving a puppy after endless hours of attempts to save it.

The following photographs shows the poor development of a fading puppy. In this puppy, it was noted on day two, that she often held her head in a “sniffing position”. Pneumonia was suspected, and antibiotics begun. On day three, she had lost body tone, and although she was nursing well, and eagerly, she did not have the body fat her littermates did. She moved less than they did. Bottle feeding began on day three. She eagerly nursed from the bottle, and took good quantities of milk, only to return to the box and nurse from her mother, although still, she gained no weight. Finally, on day five, she appeared weaker, and nursed less enthusiastically. Her bottle feedings increased, and although she suckled the milk, she tended to chew the nipple more. When given to her mother for some motherly attention, she tended to crawl under her mother, or behind her. I have noticed before, that poor doers often root under their mother, and on the last day, crawl away from her and into a cold area of the box, where they die. No infection was found in her blood culture.  Her veterinarian treated her with an antibiotic because her lungs sounded ever-so-slightly off (hard to appreciate in a neonate), although her lungs looked clear on x-ray.  At that point, despite all the added feedings, antibiotics, warming, and all the TLC we could provide, she was about 1/3 the weight of her littermates, having gained almost no weight since birth.  On day six she died.

At 4 days of age she was slightly smaller than all of her littermates.
This picture was taken after her death at six days of age. Note the dramatic size difference, and the emaciated appearance, even though she was being regularly bottle fed, and the day prior was still nursing from her mother to some extent.

These neonatal deaths are always very difficult for a breeder, but each of us should realize that nature often knows best, and despite our attempts at beating nature, she often wins the day. In the end, I had started fluids on the puppy, given her plasma, had her on a heating pad of her own, and tried everything there was to do until she took her last breath. I am left with the knowledge that I did all that I could. That’s all we can do.

Website Built by Blue Knight. All graphics , photographs, and original articles are the property of Blue Knight.  Permission must be obtained for use on other sites or for other purposes 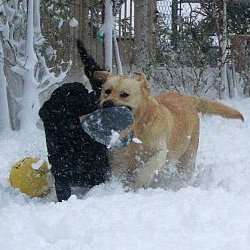