The snow has melted, and we’re well into spring activities.  Rose is healing well.  She has had it with months of rest.  As a puppy, all she wants to do is play and run.  But, her exercise is quite limited and always monitored for another few weeks.  As you can see, she puts good weight on the knee.  We’re still dealing with a bit of tendonitis in that hock, but it should work out with time and more movement with exercise.

Today is the big day!  Rose had her 6 week checkup.  She had an x-ray, which her surgeon states looks good.  Her healing is normal.  I discussed with him the lateral wobble of her knee, and he believes it may be a little tendonitis.  She may now have three 15 minute walks/day.  As stated previously, she is increasingly difficult to entertain.  She is inventing ways to chew up anything that is stationary in her box.   She wants to play with her sister so very badly.  It will be a very long time until she is allowed to do that.

This is Rose waiting to see her vet.

Rose continues to improve.  I am noticing a lateral rotation to her knee when she walks.  I suspect it has to do with muscle atrophy.  She is so tired of the inactivity.   It’s becoming increasingly difficult to entertain her.   Every so often I cheat and put her on the flexi leash to let her move out a bit without running or jumping (which she is not permitted to do).

We’re at the beginning of week four.  This has been the week that marks Rose’s breaking point.  She is so done with inactivity.  We’ve bought chew toys, chew bones, real bones, distraction toys… you name it.  Her attention span is almost nil.  She has decided to take her frustration out on the carpet she is on, chewing the corner nicely.  We take Rose everywhere we go, so as to give her new things to look at, people to see, and so that we can monitor her activities.  She has been increased to one 10 minute slow walk each day, which she loves.  She continues to put more weight on the affected leg.   This was taken on  a trip to set up 6000 Easter eggs stuffed with candy for local children.

As Rose begins her third week of recovery, she continues to improve.  She saw her veterinarian and he was pleased with her recovery.  She may now walk five minutes/day on leash (slow walk).  She still must potty on leash to prevent her from running or jumping. This was her first walk.  Please forgive me holding the camera the wrong way!

As we begin the second week (of six where she is not permitted to walk except to potty) we do all we can to keep her entertained.  She managed to chew her inflatable collar and puncture it., but we believe her wound is healed enough now to tolerate the small amount of licking she does.  She is beginning to grow coat on her leg, and the growing fur must itch.  When we take her out to potty, she puts some weight on her foot, but not so much as to worry us.  The veterinarian stated that it was fine to put weight on the foot as she will tolerate it, but she is still on restriction.  She is not permitted to go on a walk or play with other dogs.  She is still on “bedrest”.

We take her on car rides with us, so that her scenery changes, and so that she always has company with her.  She enjoys her rides, and is usually exhausted once we come home: 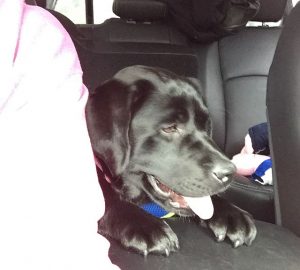 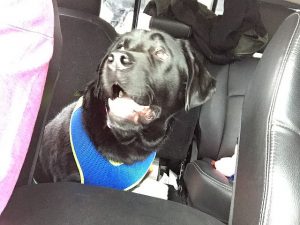 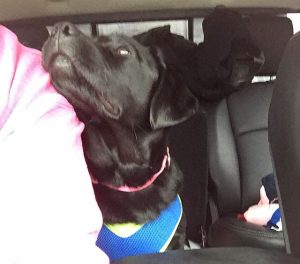 Today (4/3/17) we had a nice sunny day (the snow has just melted), so I took her outside to just sit in the sun and suck up a bit of warm sunshine.  She enjoyed it a great deal. 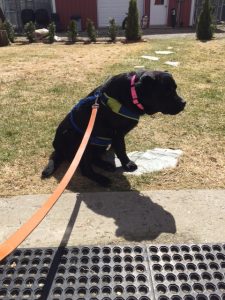 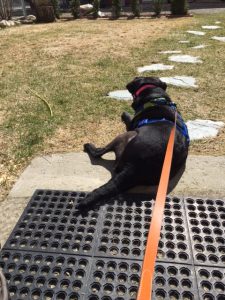 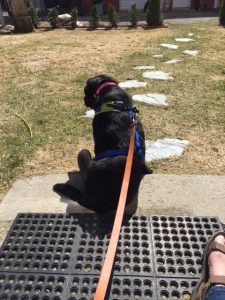 Rose’s sutures are evidently starting to itch, and she is licking her knee.  That has earned her the “cone of shame” for awhile, to keep her off of the sutures, until she’s at the 10-14 day mark, when the wound is likely healed.

She continues to be obviously bored, and at times rocks back and forth on her back.  We know she’s tired of being in the same place, not allowed to walk about or play.   This is very hard for a 8 month old puppy.  It’s not natural for them to stay put for weeks on end.  Yet, she is on strict orders by her surgeon to have strict “crate rest”, and not be allowed to go out for any reason other than to go potty, and that must be on leash.  We’re trying to find ways to resolve her boredom.  I bring her up on the couch with me to snuggle, but she tires easily of that too.  Nothing holds her attention for very long. 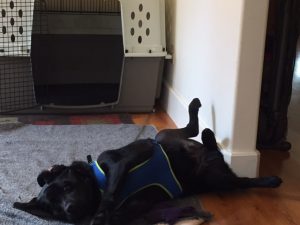 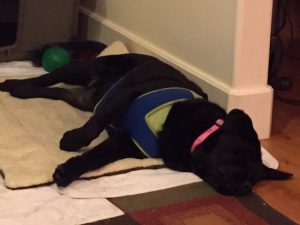 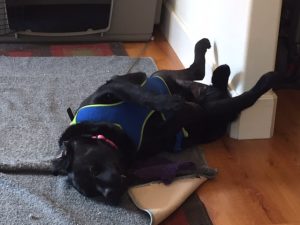 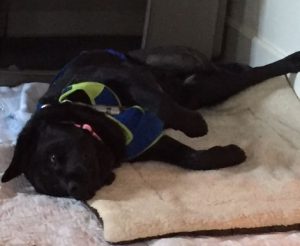 We are Icing Rose’s knee a few times each day, as she has quite a bit of swelling distal to the knee.  It’s hard to elevate the leg of a young dog.  Pillows make for good eating!  So, we are just making sure to keep it cool to reduce swelling. Rose seems to be in less pain, and because she has not had a B.M. since her surgery, we’re giving her pain medication less often.  She’s still on a anti-inflammatory, so that helps with pain, but narcotic medications increases constipation, and we don’t want that!   Pain is a natural part of healing, and as long as she is not distressed (crying or agitated), pain keeps her off that leg and quiet. 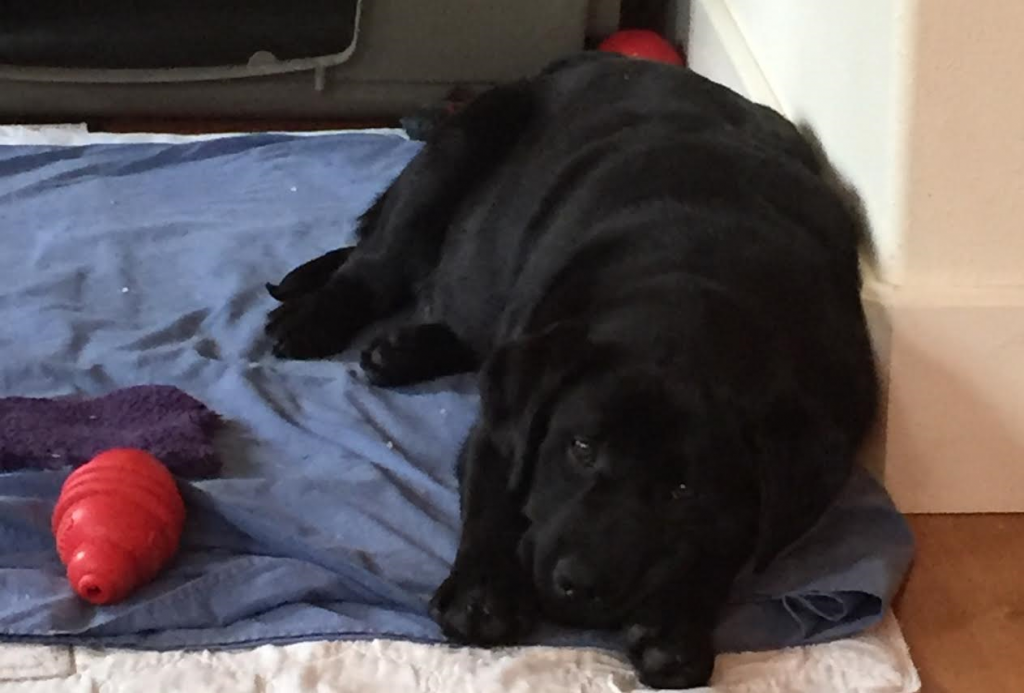 But, Rose is starting to show signs of boredom.  Since she was on crate rest for almost three weeks before her surgery, it makes sense that this poor 7 month old is going out of her mind with boredom.  If she is not in her crate, she has to be tethered, to prevent jumping or walking around on that knee.  But she’s starting to look a bit pitiful. 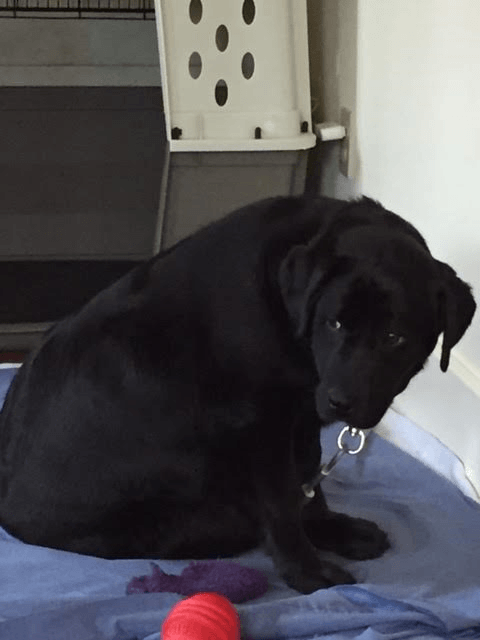 Yesterday we decided to buy her some interactive toys, and take her with us in the truck.  When the back seat lays down, it provides a perfect flat surface for her to travel on, and maybe seeing something other than our den will help liven her up:

Rose, want to go for a ride? 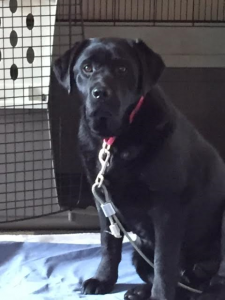 She looked at everything along the ride! 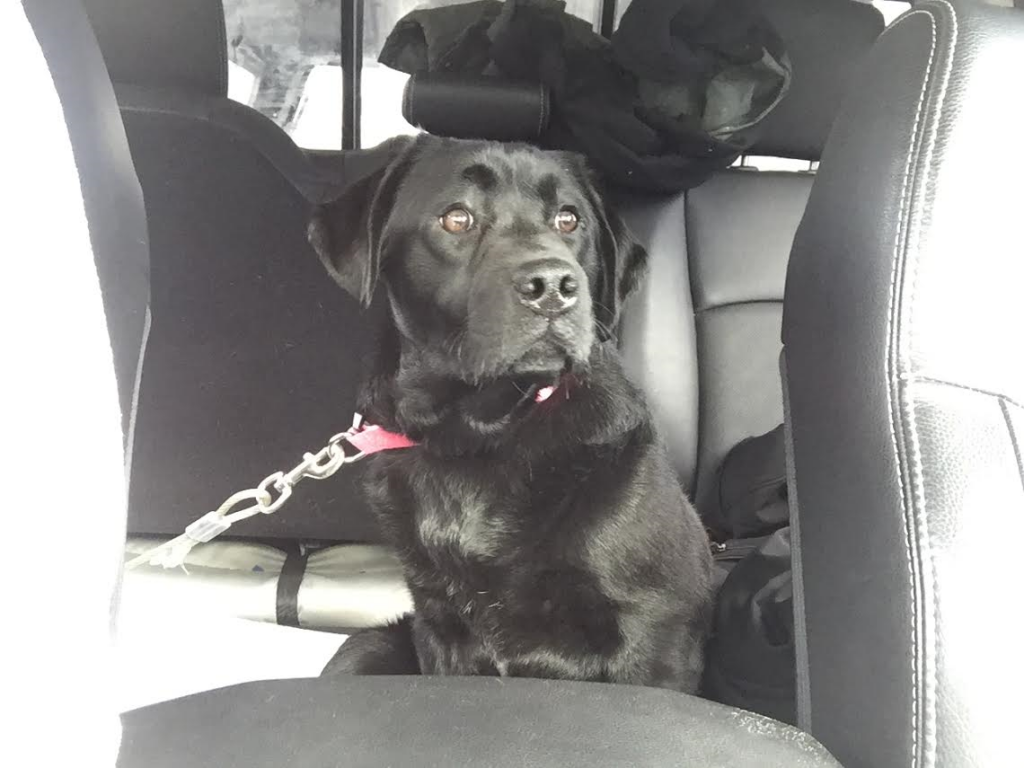 She came home exhausted, and slept for hours.  Oh, and when we came home, and she had her first B.M. since surgery.  Yay!

We bought a few interactive toys for her, and they should help entertain her a bit more.   She’s enjoying them today.(Tues 3/28/17) 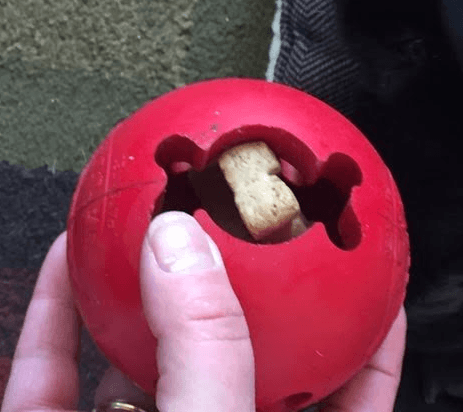 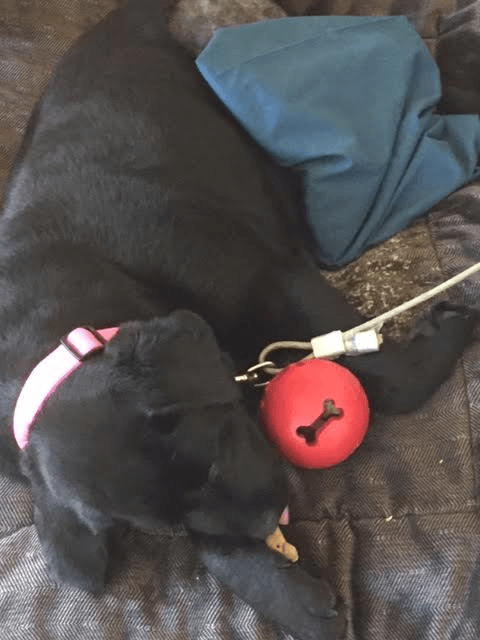 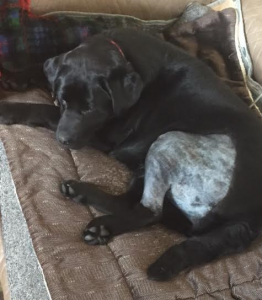 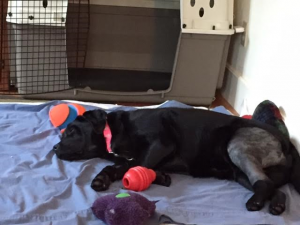 3/25/17:
We were at the office to pick up Rose at 8:15am.  She’d had a hard night, which is to be expected.  She had vomited, had some diarrhea, and cried much of the night.  They had treated her pain, and sedated her, but she was still quite uncomfortable.  We left with our girl, and the following meds: Pain med, sedative, antibiotic, and anti-inflammatory.  She is now to be only walked to go potty, navigate no stairs, no jumping or playing.  She is to be kept off her leg for the next six weeks.   Right now, she will be supported while walking, to protect both her surgical knee and her other knee (reduce the stress and strain on the good knee, which often incurs so much injury from acting as the only good leg, that it too ruptures).  One can use a towel as a sling, but we have found a horse cinch to be useful in the past for old dogs who can’t get up, that we bought a new one (we wanted no bacteria near her surgical site by using an old one). 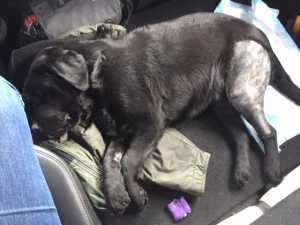 But for now, we’ll carry her.  She’s confused and in pain: How much pain?  This should demonstrate that well.  This was our drive home.  Even with pain meds and sedatives, she was just plain miserable!  Her pain broke our hearts.

We prepared for a rough night, but after getting home and in a crate she recognized, and with the sounds of home, she settled down. 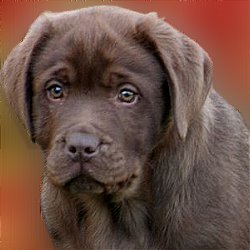